Have you lost excitement and enthusiasm towards everything in your life?

Perhaps you have lost interest in the day-to-day activities that used to bring joy and pleasure into your life. Feelings of hopelessness and overwhelming pessimism have become your new normal and feeling good is a distant memory. You may find it difficult to concentrate, which understandably impacts your personal and professional life. As nothing is being achieved, you start to feel more and more depressed and worthless. You might have tried to talk to your partner or friends about it – but it seems like no one understands. 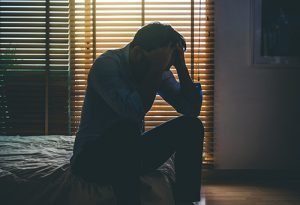 Comments like “You just need to go out and do more fun things!” or “Focus on the positive” aren’t helping at all. You are trying to put on a “happy face” but it only makes you feel even more isolated and lonely. You might have even started to think that the world would be better off without you as you perceive yourself to be a burden on everyone’s else lives.

Feeling down from time to time is a normal part of life, but when emptiness and despair take hold and won’t go away, you may be dealing with depression. Depression can be a cripplingly painful experience. You feel exhausted all the time and just getting through the day is now a challenge. Even small tasks take longer to complete and seem to require much more energy. Tears and sadness have replaced laughter and you believe that nothing will ever get better and that there’s nothing you can do to improve your situation. You feel like you are “living in a black hole” or having a feeling of impending doom.

Have you noticed an increase in physical complaints such as headaches, back pain, aching muscles, or stomach pain?

Do you find yourself much more irritable and short-tempered than usual because your tolerance level is low?

Does everything and everyone just get on your nerves?

Strong feelings of worthlessness or guilt are your new companions and you harshly criticise yourself for perceived faults and mistakes.

Have you started wondering whether you will ever be able to be happy and “normal” again?

If only you could lift this fog hovering over you.

Depression is a World Health Concern

If you are struggling with the symptoms of depression, you are not alone. More than 300 million people across the world are now living with depression – an increase of more than 18% over the past decade.

According to the latest estimates from the World Health Organization (WHO), 1.3 million Australians (5.9% of the population) are experiencing a depressive disorder of some kind. This is the highest rate of depression among all countries in the Western Pacific Region. Depression has high lifetime prevalence – one in seven Australians will experience depression at any point in their lifetime. Depression also holds the third highest burden of all diseases in Australia (13%), as well as third globally.

In addition, depression is the number one cause of non-fatal disability in Australia (23%). This means that, on average, people with depression live with this disability for a higher number of years than people suffering from other non-fatal diseases such as hearing loss and dementia. Depression is also twice as common in diagnosis among women than among men. Concerningly, the World Health Organisation estimates that depression will be the number one health concern in both the developed and developing nations by 2030.

Although no one can be sure what exactly causes depression, it is thought to stem from a variety of factors. These factors include genetics, trauma, stressful life events, chronic medical conditions or pain, brain structure, and substance abuse.

It is a great tragedy that people who suffer from depression don’t seek the treatment that they need and simply give up on the idea of living happy and fulfilling life. The good news is that most people with depression improve within just a few weeks of commencing scientifically proven treatment. It is not your fault that you are depressed and you deserve better.

With Depression Treatment, you can reclaim your life

Undertaking depression treatment can help you understand why you are struggling so much and assist you to move towards living a more hopeful, focused and energetic life. Together, we will identify the things you want to improve in your life and then develop a suitable plan that will keep you on track. We will focus on helping you bring back the resources you once had, but somehow lost track of.

Working at your pace, we will take time to understand the patterns, circumstances and historical issues that are contributing to your current struggles. I will help you reflect on your past and gain insight into your situation. In a safe and non-judgmental environment all your feelings will be welcome so you can feel comfortable with who you really are. I will offer my guidance and support on your path to recovery.

If you are ready to take the next step towards healing – please get in touch with me today.

It’s time to experience joy and potential lightness of being

With depression treatment, you can learn how to challenge your beliefs to build a more accurate, positive view of who you are and what you are capable of. I will show you that the relief you have been longing for is well within your reach.

My holistic approach to depression treatment will support you in understanding and healing the issues that lie beneath your depression. Finding some reprieve from the symptoms of depression may seem impossible, but it isn’t. In constant collaboration with you, I will provide a comprehensive treatment plan that supports the changes that you both deserve and desire. You will begin to appreciate the small things and let go of negative thoughts that are holding you back.

If you are still wondering whether Depression Treatment can help…

You can live a happy and fulfilling life again

It is time to put yourself first. If you are not feeling truly happy, you simply cannot get the most out of life and your relationships. Getting help is a sign of courage, strength and commitment to who you want to be. If you are ready to take the next step towards a better life – I am here to help. Please get in touch.

Are you suffering from PTSD?

Have you experienced a traumatic and/or stressful event?

Find out if your symptoms mean you might be dealing with post-traumatic stress disorder.